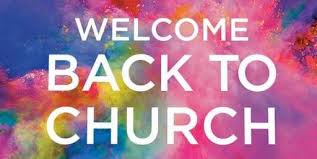 We’re delighted to be worshipping in the church building again from September. Book now for all the services and children’s groups you’d like to attend.

Visit our Parish Magazine page to read our latest edition, and browse past months' news.

Today’s NT reading gives us the famous speech Paul made to a group of intellectuals in Athens. He certainly rose to the occasion seizing the opportunity to proclaim Jesus as the one who reveals the true identity of the ‘unknown god’ as inscribed on a Greek altar at the Areopagus. We can understand how Paul the apostle managed to acquire saintly status although we know from St. Paul’s own teaching (1 Cor 6:2 and Rom 1:6-7) that all Christians are saints simply by virtue of our membership together in a spiritual body with Christ at its head. Nevertheless, we are aware that a good number of Christian men and women are now remembered specifically by name as worthy of the title ‘Saint’. As good examples of this we might think of Teresa of Avila, Julian of Norwich, Francis of Assisi and of course not forgetting Chad of Mercia and Far Headingley.

But there are other Christian saints who are less well known yet equally worthy of our attention. I wonder how many of you are aware that today, 24 September, is the Feast Day of St. Robert of Knaresborough. He lived over 800 years ago. Being the son of the Mayor of York he certainly had a privileged upbringing but he gave that up and spent most of his life as a hermit living in a cave by the River Nidd near Knaresborough. It was there that he gave a saintly example of prayer, simplicity and compassion towards those around him who were most in need of support. He became well known and attracted pilgrims from across Europe. The Pope himself acknowledged his saintliness. King John also once paid him a visit in the company of the Constable of Knaresborough Castle. It was there that they found Robert at prayer and refusing to be disturbed! When he was pressed Robert produced an ear of corn and said ‘Is your power such, my Lord King, that you can make something like this out of nothing’? When King John admitted that he couldn’t Robert replied that his devotion was given first of all to the One who could, a not too subtle reprimand to the king for disturbing his time of prayer! Robert wasn’t afraid to speak his mind so he was a true Yorkshireman, a worthy candidate indeed for the title ‘Patron Saint of Yorkshire’.

The saints still have much to teach us about our Christian priorities, not least during this challenging time of pandemic and also during this month of Creation-tide by encouraging us to become more worthy stewards of the world God has made for us to care for responsibly and to share equally. I hope this prayer will help to focus our thoughts, words and actions today and don’t forget to make a pilgrimage to St. Robert’s Cave next time you’re in Knaresborough, just half an hour’s walk down Abbey Road. ... See MoreSee Less

Share on FacebookShare on TwitterShare on Linked InShare by Email

Thought for the Day

Please follow this link for our daily Thought for the Day

Thought for the Month

“Lord God of surprises, we thank you that you know each one of us

and you call us to humble obedience to your will.

Give us that readiness to hear, accept and follow

your purposes for our lives. Amen”

A prayer by Archbishop John Sentamu

We were so proud to find out that St Chad's had won the Green Futures Award at the recent Church Times Green Church Awards.  Find out more here.

Church of England, Diocese of Leeds

Please donate to our church