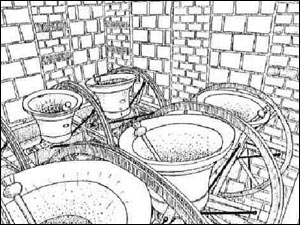 Originally the church had only three bells, which were cast in 1867. A further four were added in 1872 and a treble in 1876. All were cast by John William Taylor senior and recast in 1933 by his son, Edmund Denison Taylor, at his own expense. The weight of the tenor was originally 20 cwt., but after recasting is now 18 cwt. 2qr. 18 lb. in E.

The following is from an article published in ‘The Ringing World’ on 30 April 1971.

Situated three miles on the north-west side of the city of Leeds on the main Leeds – Otley road, Far Headingley is a well-populated suburb, the church managing to retain a rural atmosphere, with the church cricket club ground in front of the church.

Provided for the parish by the first Lord Grimthorpe, the church was consecrated on 11 January 1868. Between 1909 and 1911 the church was extended and a new chancel built together with a Lady Chapel. This put the 175ft tower and steeple into a much better perspective. The style of the church is 14th century Gothic and is especially dominant within. The tower and steeple are beautifully designed, the spire being octagonal and triple-banded in a double elongated lozenge pattern – a rare feature. By coincidence it is similar in design to the spires of Salisbury and Lichfield Cathedrals.

Originally the church had only three bells, which were cast in 1867. A further four were added in 1872 and a treble in 1876. All were cast by John William Taylor sen. and were recast in 1933 by his son, Edmund Denison Taylor, at his own expense. The weight of the tenor was originally 20cwt., but after the recasting is now 18cwt 2qr. 18lb in E.* Hung in an oak frame, the bells are acknowledged by many to be one of the finest rings of eight in the country.

An interesting record in the tower is that of the first peal on the augmented eight, one of Kent Treble Bob Major, on 22 December 1877, conducted by Jasper W. Snowdon, who was the first president of the Yorkshire Association.

The bells are rung twice every Sunday, and the practises on Thursdays are always well attended. During the academic year there are augmented by students from the University of Leeds, many of whom reside in the parish. Yorkshire rope-ends are of course, the order of the day.

* As a sub-note, the bells have been analysed tonally since this article was produced and deduced that actually the bells are tuned closer to the key of E flat rather than E, but they are a sharp E Flat.

Thought for the Month

“Lord God of surprises, we thank you that you know each one of us

and you call us to humble obedience to your will.

Give us that readiness to hear, accept and follow

your purposes for our lives. Amen”

A prayer by Archbishop John Sentamu

We were so proud to find out that St Chad's had won the Green Futures Award at the recent Church Times Green Church Awards.  Find out more here.

Church of England, Diocese of Leeds

Please donate to our church